Joseph has conceived and written the following creative projects, for which he is currently seeking resources for production. 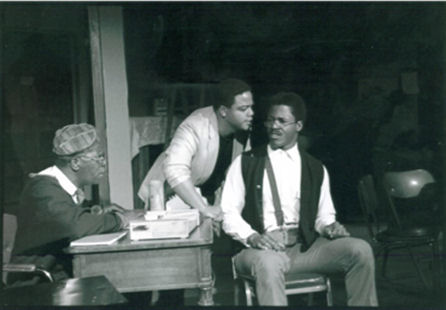 On stage as Professor in Homegrown, National Black Theater, 1992

Based on the true story of Joseph running Harkhomes, a shelter for homeless men in Harlem. Adapted from his stage play Homegrown, which was produced at the National Black Theater in Harlem and experienced two extended runs in the 1990s. In addition to writing the stage play Homegrown, he acted in it, playing Professor (“a homeless man . . . nerdish, diffident – the still-hovering cloud of his troubled past characterizing his behavior. His speech is affected with a misguided eloquence, firing words and phrases like a soldier fighting a guerrilla war with bayonet tactics.”) Homegrown The Musical is more than a theatrical production; it is a social movement designed to inspire audience members to build a better world.

Harlem Law: Justice Beyond The Courtroom

Beacon Place: Compassion Comes In From The Cold

Logline: Two compassionate ministers – an earnest preacher and his old-school dad – lead a down-and-out ensemble of homeless men through the travails of daily life at an under-funded, crisis-fraught Harlem shelter; they’re Sanford & Son for the twenty-first century, fixing lives instead of junk.

Biopic adapted from Joseph’s stageplay, Cast Me Down, which ran Off-Broadway in 1987.

Logline: Booker T. Washington, the greatest Black leader of his times, rises from slavery, builds a movement, outwits a White segregationist lawyer, and saves an enterprising Black activist; in doing so, he is transformed from equivocal educator to reluctant hero to American legend.